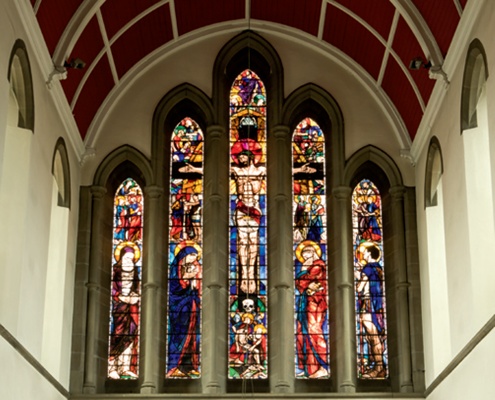 Wallsend and the Tower of Glass

the 19th and the early 20th centuries.

Among examples of stained glass that have ‘literally taken his breath away’, Saunders singles out

a major work, The Crucifixion (1922), by the Irish artist Wilhelmina Geddes at St Luke’s, Wallsend.

“To see this Geddes is to recognise, like scales falling from the eyes, that nothing quite matches the highest

I stared at and absorbed it for a good ten minutes. Only a personal visit can suffice,

photographs cannot convey the way it commands the whole interior.”

As early as 1922, when her profoundly moving, powerfully painted and sonorously coloured

Crucifixion was erected in Wallsend, a future director of the National Gallery of Ireland expressed

the view that she was producing ‘the most sincerely, passionately religious stained glass of our time’,

while another critic praised her ‘strong expressive drawing’ and her extraordinary ‘power of simplifying without loss of meaning’.

Others noted the ‘religion of power and fighting, not the religion of peace and restfulness’

in her glass, the ‘great emotion’ in her ‘fine, bold drawing’ and the ‘virile, almost alarming

strength’ in her superbly painted figures.

The achievement of  Wilhelmina Geddes needs to be re-evaluated. When she died in 1955,

she was justly described by The Times as ‘the finest stained glass artist of our time’, in whose work

of ‘outstanding artistry and craftsmanship… is a revival of the medieval genius’.

There are more windows by ‘Tower of Glass’ (in Gaelic An Túr Gloine) artists in Wallsend: 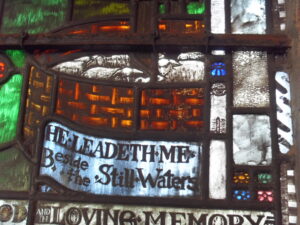 The Good Shepherd, Mary of Bethany and David, 1921, St Peter’s, Wallsend upon Tyne

Shows the An Túr Gloine trademark (a miniature glass tower) with the artist’s signature.

Little known outside Ireland, even though there are three exceptionally fine three-light windows of his

in the chancel chapel, St Peter’s Church, Wallsend upon Tyne:

Our Lord with the Nativity and the Shepherds (1919)