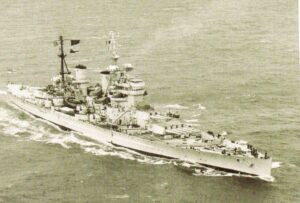 Right in the centre of Wallsend stands a pub named ‘The Anson’ named after a battleship built at Swan Hunter & Wigham Richardson, Wallsend

HMS Anson was one of five King George V Class battleships built to counteract the threat from Nazi Germany.  The first ship to be completed was the King George V herself, followed by the Prince of Wales, the completion of which had been delayed by bomb damage received during an air raid in August 1940 whilst fitting out at Cammel Laird’s yard at Birkenhead.  The third ship to join the fleet was the Duke of York, followed by Anson and then the Howe.

Once commissioned, she left Scapa Flow to provide distant cover for the Arctic Convoys, which continued through to mid-1943.  From June to October 1943, she was engaged from home waters in operations code named ‘Governor’, ‘Leader’, ‘Tungsten’ and ‘Planet’.  These were mainly involved in moves against the Tirpitz in Norway and to deceive the Germans into believing that there would be allied landings in Scandinavia drawing attention away from invasions planned in other areas.

Anson underwent a 9 months refit at Davenport in June 1944, being re-commissioned in March 1945.  Subsequently, she was dispatched to join the British Pacific Fleet, leaving Scapa Flow on 25  April.  She berthed in Grand Harbour, Malta on 2 May in company with her sister, the Duke of York.

Anson then pressed on alone to Sydney, leaving there on 15 August for Hong Kong, where she arrived on 29 August 1945 to take the Japanese surrender under the flag of Rear Admiral Cecil Harcourt, the C in C, Hong Kong.

A large force was put ashore from Anson to assist in restoring law and order to the colony and to mop up any remaining resistance and the ship remained with the British Pacific Fleet thereafter, being the last of the KGV Battleships to arrive home, reaching Plymouth on 29 July 1946.

After a while, Anson served as Flagship to the training squadron based at Portland in Dorset, taking over from the ageing battleship ‘Nelson’ (also built on the Tyne at Elswick, Newcastle).  She was finally paid off in November 1949, being towed to the Gareloch in Scotland, where she was mothballed.  In April 1957 it was decreed that all four surviving KGV battleships would be scrapped and Anson was towed the short distance to Faslane, to be broken up.

She never fired her guns on an enemy ship.

Admiral of the Fleet George Anson , 1st Baron Anson PC, FRS, RN (23 April 1697 – 6 June 1762) was a British admiral and a wealthy aristocrat, noted for his circumnavigation of the globe and his role overseeing the Royal Navy during the Seven Years’ War, in which time Britain became the dominant world sea power.  During his time in office Anson instituted a series of reforms to the Royal Navy.   First Lord of the Admiralty from 1751 until his death, Anson had a total of seven ships named after him.