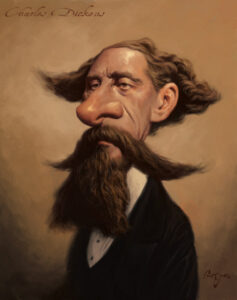 How many people know that one of Britain ‘s best loved writers gave a mention to our town?

On reading Dickens’  “Our Mutual Friend”, you might not only be surprised, but also a little confused; just what did he mean by the “glow of Wallsend?”

Anyone without an interest in local history will be forgiven for being unaware that Wallsend had a reputation for producing the world’s best fuel and that the very name Wallsend was in fact a synonym for top quality coal.

‘Now, regarding your respected father,’ said Lightwood, bringing him to a subject they had expressly appointed to discuss: always the most slippery eel of eels of subjects to lay hold of.

‘Yes, regarding my respected father,’ assented Eugene, settling himself in his arm-chair.

‘I would rather have approached my respected father by candlelight, as a theme requiring a little artificial brilliancy; but we will take him by twilight, enlivened with a glow of Wallsend.’

He stirred the fire again as he spoke, and having made it blaze, resumed….

From “Our Mutual Friend”  by Charles Dickens.

Dickens also wrote a short story entitled “Scotland-Yard” concerning a part of the capital inhabited by Coalheavers and of their fears that they would wake from their sleep to find the Thames dried up.

“The walls of the interior are decorated with views of the Wallsend, Percy, and other celebrated collieries…”

This though, was written by the great man’s first son, Charles Culliford Boz Dickens.