Beatrice was born in West Virginia, U.S.A. on 20 September 1921, lived there for eleven years before moving to Wallsend in 1932 aged 11, and went to school in Wallsend.  She married Tom Clark in 1942 and had two children, Barbara and Walter.  In 2012 they celebrated their Platinum Wedding Anniversary with a letter from the Queen.  They lived in Walkerville for over sixty years.  Beatrice involved herself in many local organisations including the St Oswald’s Wives Group at Walkergate, Newcastle City Guides and Wallsend Local History Society where she joined the committee in 1984 and stayed on it until she stepped down through ill health in 2006.  She was elected President of the society from 2008-2013.  Beatrice took a great interest in local history and was always a ‘hands on’ member of the committee, helping out at all meetings and events not least on the Wallsend Local History stall at Wallsend Festival each year.  She died peacefully on 17 Dec. 2016 aged 95. 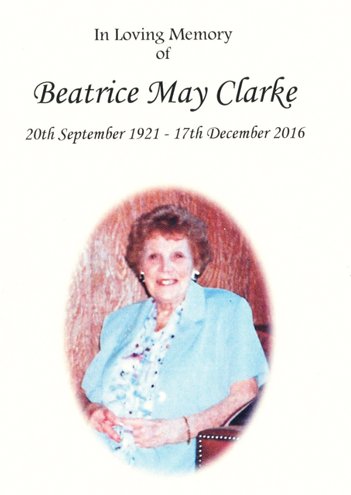 Before Don got involved with Wallsend Local history Society he had been actively researching records of people killed in the Parish of Willington, the area of Wallsend he was from.  After over 20 years of research he produced a book to record the information – ‘The Willington Roll of Honour 1939 – 2002’.  On 12 November 2002 a service of Remembrance was held at Churchill Community College to dedicate a memorial plaque to the servicemen and civilians of Willington Quay, Howdon, Willington Square, Rosehill and Holy Cross who died during the wars and conflicts from 1939 -2002. Copies of the book were dedicated for safekeeping in St Mary’s Church, St Paul’s Church, St Mark’s Church, St Aidan’s Church and at Churchill Community College.
In addition Don also made the information available on a CD for anyone else who wanted a copy.

Don Price became a member of Wallsend Local History Society in 2003 following his retirement from work in the Army and also to develop further his passion for his home town of Wallsend. His enthusiasm was infectious and was encouraged by his friend Billy Mole.

Don was not the type of person who could just sit back and listen to the talks; he soon wanted to get involved with the work of the Society and joined the Committee in 2004.
He was full of ideas and quickly realised that the Society needed to move into the 21st Century and embrace new technology.
He researched all sources of grants then worked his way through the process of filling in the complex application forms.
This also involved preparing a detailed schedule of all the work the Society and individual members had carried out over the previous 10 years to promote the history of the town in the community, specifically the Society’s involvement each year with the Wallsend Festival, talks to community groups, assistance given to local organisations, books written and research projects undertaken. This was the first time a full list of all this important work had been recorded.
He also produced a new Constitution for the Society.
All this hard work had the desired effect in 2005 as the Society was awarded £3765 by Voda to buy much needed modern digital projecting equipment including a laptop, scanner and printer as well as storage cupboards to store the equipment and existing archives.

Don became Project Secretary in 2005, Property Manager in September 2005 after the equipment was purchased
and then Secretary of the Society in 2006 when John Stephenson became President after 30 years as secretary. Don continued to promote the Society in word and deed as well as running the day to day business of the Society with his usual efficiency.

He amassed a very comprehensive collection of digital photographs of Wallsend, all meticulously recorded and including records of the copyright ownership. He would borrow a photograph take it home, scan it and return it to the owner the same day and this trust led him to gain the confidence of many previously reluctant contributors.

This collection led to Don producing his excellent CD‘s of Wallsend photos which he produced himself and gave away to members and other interested persons freely as well as displaying them on his computer at Wallsend festivals.  He launched one of these CD’s during the Wallsend Town Hall Centenary Celebrations in 2008 to much acclaim.

His collection of old photographs from Wallsend schools, were always well represented at the Wallsend Local History Society stand at the annual Wallsend Festival in July. They were so popular that pedestrian flows through the Forum Shopping Centre were often blocked by people jostling to see if they could find their relations staring
back at them from ages past.

Don already had his own laptop computer and had developed an expertise in producing PowerPoint presentations which include moving pictures and words as well as music, giving them that professional look. He regularly gave talks for the Society as well as other Community groups.  Many members still talk about his ‘Big River’ presentation on the River Tyne with the haunting theme sung by Jimmy Nail which he gave in November 2007.  He was asked to repeat it again in September 2008, he also gave a talk entitled ‘Beyond the Grave’ in January 2007 and on the ‘History of St Peter’s Church’ in May 2009 following the publication of his book to celebrate the church’s 200 years celebrations.

With the help of Vera Page, Don embarked on producing the first ever Newsletter for Wallsend Local History Society, which he called ‘The Tattler’. The first edition was produced in July 2006 and he went on to produce further editions in April 2007, April 2008 and a special Remembrance Day Issue in November 2008. He not only edited the newsletter he also printed, compiled, stapled and distributed them.

For the 2009 Bi-Centenary of St Peter’s Church, Don agreed to write a booklet on the history of the church, again not only writing it but printing, compiling and distributing it himself;  this excellent publication was well received during the celebrations and has become a much respected and sought after memento since.

Coming from a services background Don’s main passion was researching the ways in which Wallsend was affected by the World Wars.  He carried out very detailed and meticulous research into all the war dead from Wallsend, not only those killed in action but all civilians killed in air raids and those killed in the Merchant Navy.  He discovered what he and many others considered a great wrong when he was researching the names included on Swan Hunters Memorial Hall War Memorial. He discovered that a number of Wallsend men killed in the First World War were not included on the memorial because they were serving in the Merchant Navy rather than in the ‘official forces’.
When the war memorial plaques were stolen in 2008, Don was able to provide North Tyneside Council with a full list of names that had been on the original monument.  To his credit he fought long and hard with those responsible for replacing the monument to have the missing names from those lost in the Merchant Navy to be added to the new replacement panels.  It was fitting that he should receive the news that he had won this particular battle shortly before he died on 13th August 2010.

Don realised he could not continue as Secretary and stepped down in 2008.  Despite being very ill in his last few years he continued to work on the task he had set himself to record all Wallsend’s war dead and again he did not disappoint, finalising the work in 2010.

Don was only a member of the Society for about 6 years but in that time he made a tremendous contribution moving the Society forward with technology and providing equipment as well as producing numerous books, pictures, records and CD’s.

John Samuel Stephenson was one of the founding members of Wallsend Local History Society in 1973. He was an active member of the Committee starting as Programme Secretary in 1973 and also took over as Secretary in 1976, a post he held until 2006 when he became an Honorary Life Member and was elected President. He remained a member of the Society until his death on 3rd November 2011.
He was an expert on W T Stead, the famous pioneering journalist and World Peace campaigner, one of Wallsend’s most famous residents and John was the official biographer of the Stead Family. He was a member of the international W.T. Stead Memorial Society and he organised three international Stead Conferences in 1987, 1991 and 1999. He published a booklet on W. T. Stead and his Family in 1987, he was also writing another book on the family at the time of his death and hopefully the research will be published in due course.
John was born in Wallsend and lived in the town all his life and he followed in a family tradition of taking an interest in the town as one of his predecessors had been Mayor of Wallsend. In 2005 John was also made a Freeman of the City of London.
Over the years as Secretary of the Society he was involved in campaigns to establish a museum in Wallsend and preserve the Roman Fort of Segedunum which led to extensive excavation involving many members of the Society. This later led to the establishment of Wallsend Heritage centre in 1986 and later the present Segedunum Roman Fort, Baths & Museum in 2000.
Over the years John gave a number of talks to the Society on the Stead family and other subjects. John was also instrumental in arranging to have plaques erected in Wallsend to remember members of the Stead Family, as well as a plaque erected at St Peter’s Church to commemorate the worst ever (at the time) mining disaster in 1835 when 102 men and boys were killed.
In 1998 John produced a 17 page report to commemorate ‘25 Years of Wallsend Local History Society’. In the report he records the contributions made by so many members over the years, of whom many are sadly no longer with us, as well as recording the many achievements of individual members and the Society itself. It was written two years before the opening of the multi award winning Segedunum Museum (work had commenced on the museum) which has now fulfilled the original aim of the Society to celebrate and make accessible the unique heritage of Wallsend to visitors from around the world. In the report John has modestly underplayed his role in the success of the Society in the first 25 years but he was one of the few members to play an active and important role over the full 25 years.
John was an active and enthusiastic member of the Society for over 38 years and everyone who met him in that time will have heard about the famous town of Wallsend and one of its most famous sons, W.T. Stead. 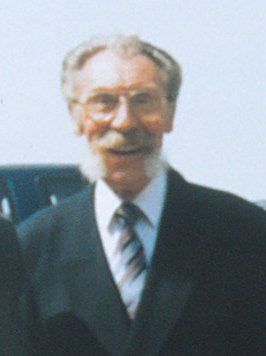 
Ken was a great enthusiast for the history of Wallsend, gave talks to local groups, including the History Society and was an active volunteer for the Citizens Advice Bureau and other organisations. Apart from being a member of the Local History Society he was one of the first volunteer guides at Wallsend Heritage Centre. After the Wallsend Heritage Centre closed in 1986 Ken then trained as a volunteer guide for Segedunum Fort along with previous Chairman Vin Wallace and present Vice Chairman Ken Hutchinson. He became Secretary of the volunteer guides group and continued until the museum closed, but still continued to do tours of the site for friends and family.